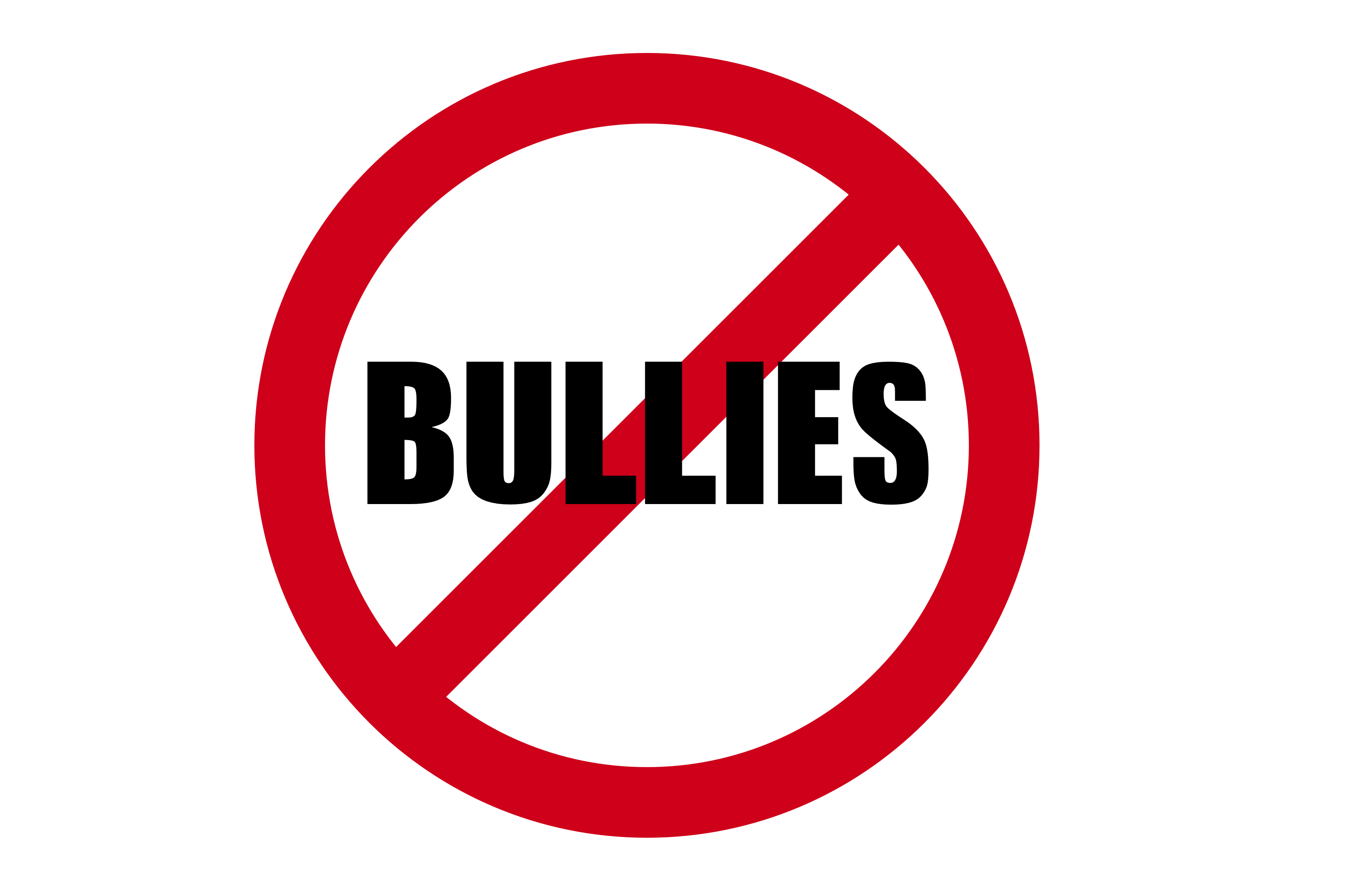 A Coronavirus Reminder: Concurrent Compliance Is Not Obedience

One of life’s minor annoyances arises when someone who thinks they have authority over you, but probably doesn’t, tells you to do something that you already were going to do. You do it anyway, while the other person gloats. I’m thinking about your boss’s child, a co-worker with seniority, or an older sibling. Worse, you might hear yourself say: “I was going to do that anyway. So there.”

What really rankles you? Is it because Biff the boss’s son can score twice? He’s able to take credit for blurting out an action plan, and again for its implementation.

In a way, Biff is complimenting you for a good idea. He values your idea and effort, but wants to take credit for both. I imagine the annoyance people feel when this happens has inspired countless inventions, start-up companies, and entrepreneurs.

Another reason you’re annoyed is a claim of authority. Biff isn’t your boss, but asserts or presumes to possess authority over you anyway. His authority is absent or unearned. Yet Biff is determined to exert it to his betterment and your detriment. If you fall into the habit of acquiesing, what happens when Biff runs out your good ideas and starts ordering you to do stupid things? Dangerous things? Things that have permanent consequences? What is Biff is now an elected official?

Concurrent compliance is what happens when governments make policies and enact laws that people would follow anyway, of their own volition. They’re inherently good ideas no matter who issues or takes credit for them. If you take the Venn diagram of people who stop at stop signs to avoid collisions, along with the people who agree that murder should be a crime, you’ll probably find a 99.9 percent overlap with the statutes of any given country or state. 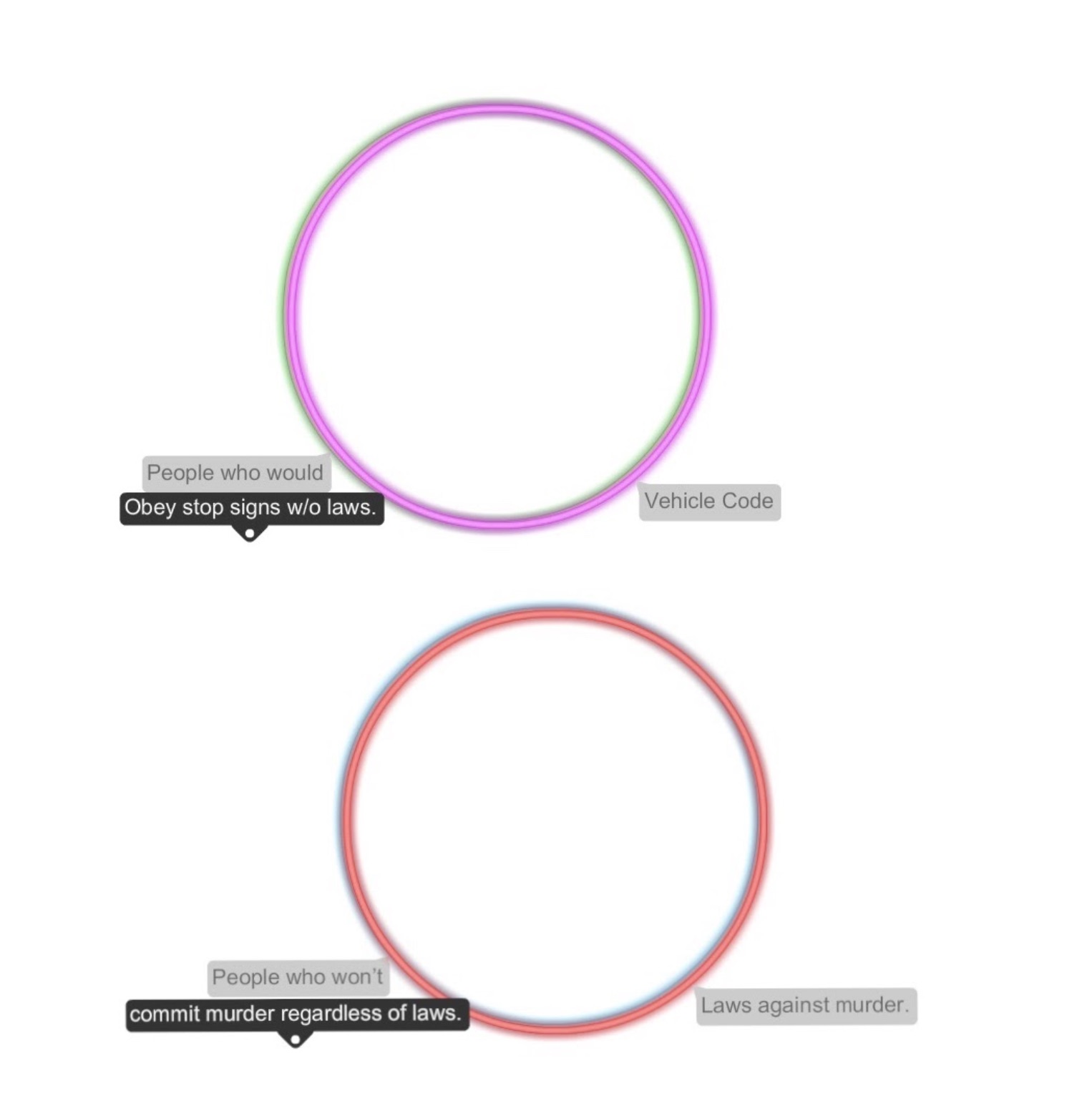 In these circumstances the Right Honorable Biff is compelling us to do things we’d already do or not do. There’s no appreciable tension between law and compliance. But the situation changes when government policies become untethered from the good ideas that people would comply with anyway—and mutate into over-regulation for the sake of regulation. This is regulation “because I said so.”

The problem arises when this impacts a fundamental right. When people must choose between their own best judgement on a policy, and the government’s policies imposed by law, we get this: 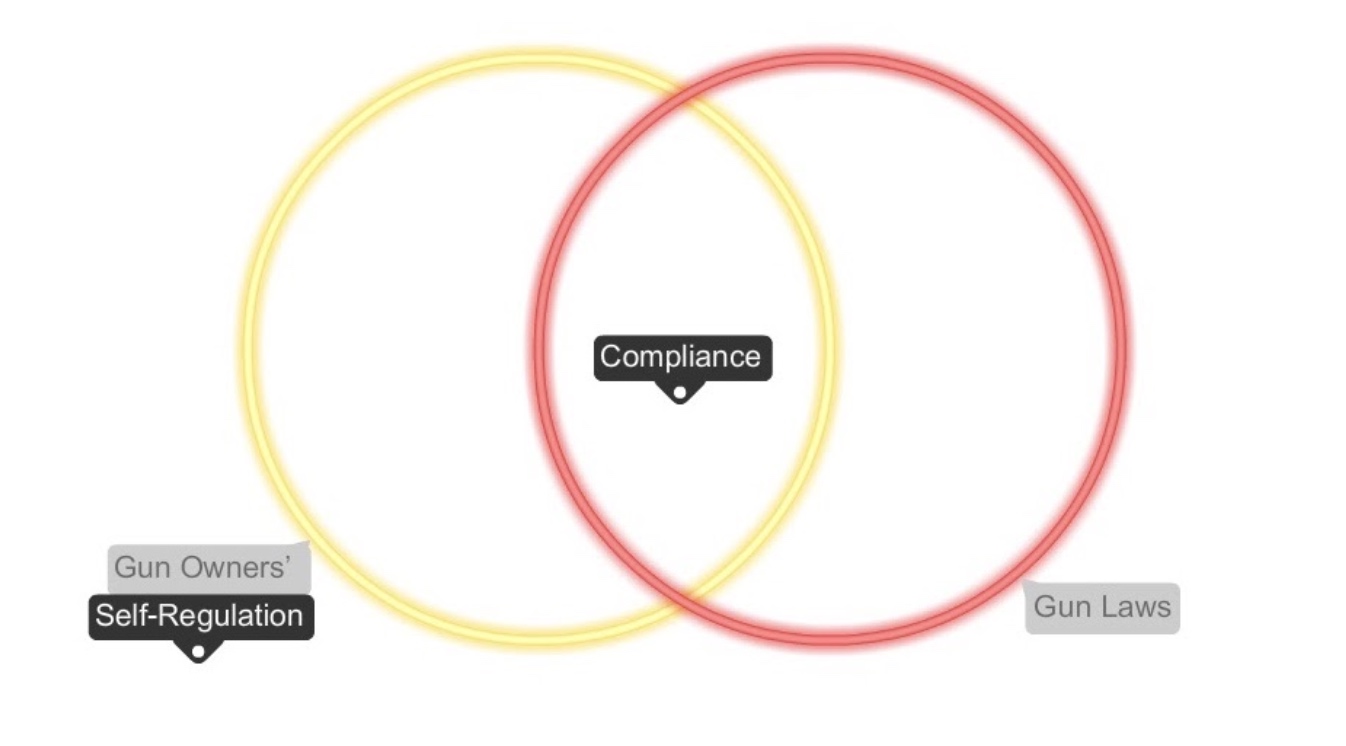 You can extrapolate this to any society’s increasing propensity to pass laws regulating an increasing amount of human activity. That increases the tension between Law and Liberty. If we define compliance as a measure of the legitimacy of a government, government becomes viewed as increasingly illegitimate.

Most violations of the law are never discovered by the government (though that may change as the surveillance state grows). Prosecutorial discretion moots others. When this happens, society can reach a tentative equilibrium: Citizens exercise their rights outside of the law, and the government tolerates this benign defiance because officials are able to claim that they’re still in charge. 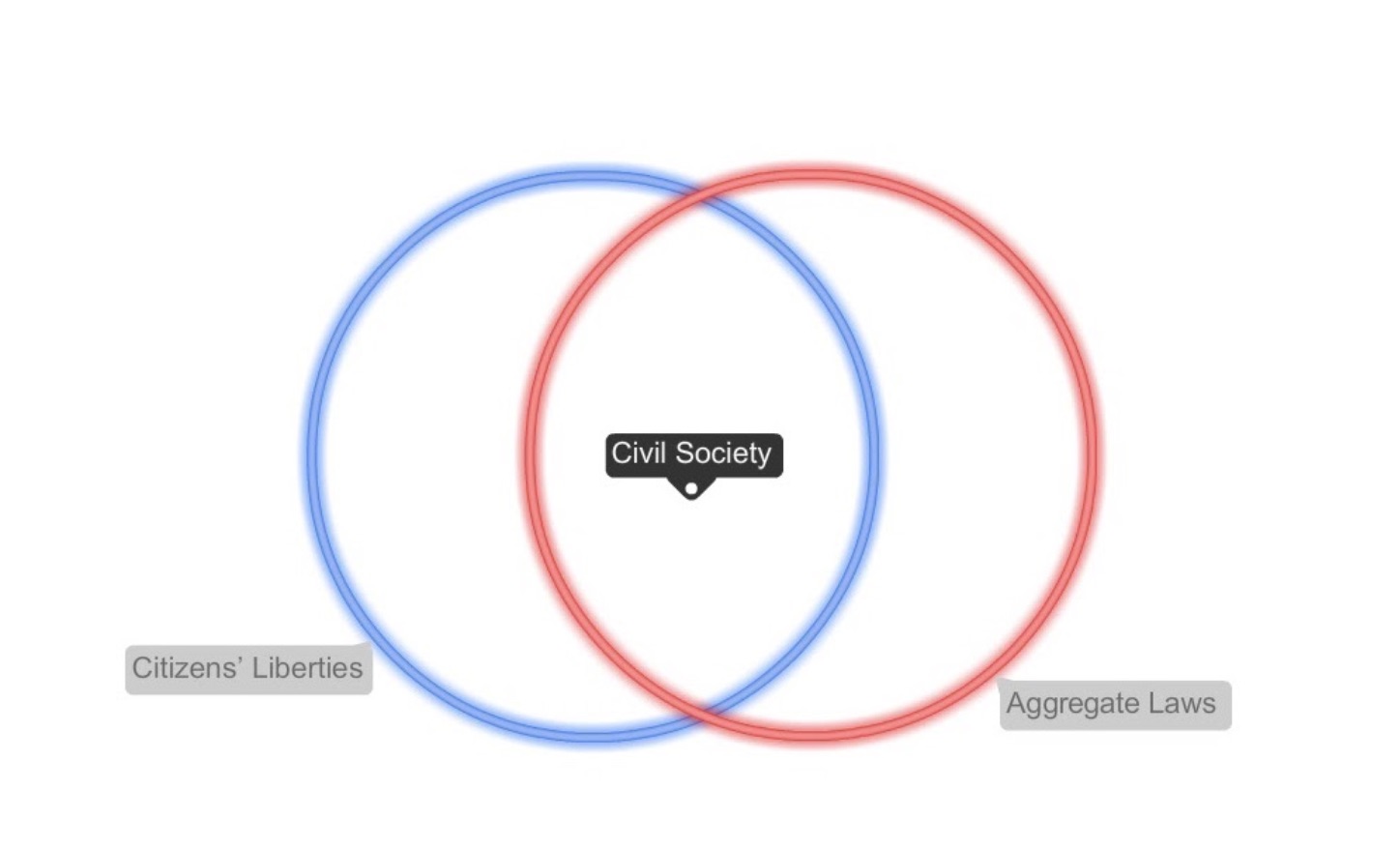 But what happens when this trend is taken to an extreme? This arises when stubborn citizens insist on exercising their liberties in defiance of “a multitude of New Offices, and […] swarms of Officers [that] harass [the] people, and eat out their substance”? (Bonus points if you recognize the quote. Hint: the document starts out: “When in the course of human events…”) Then you get this: 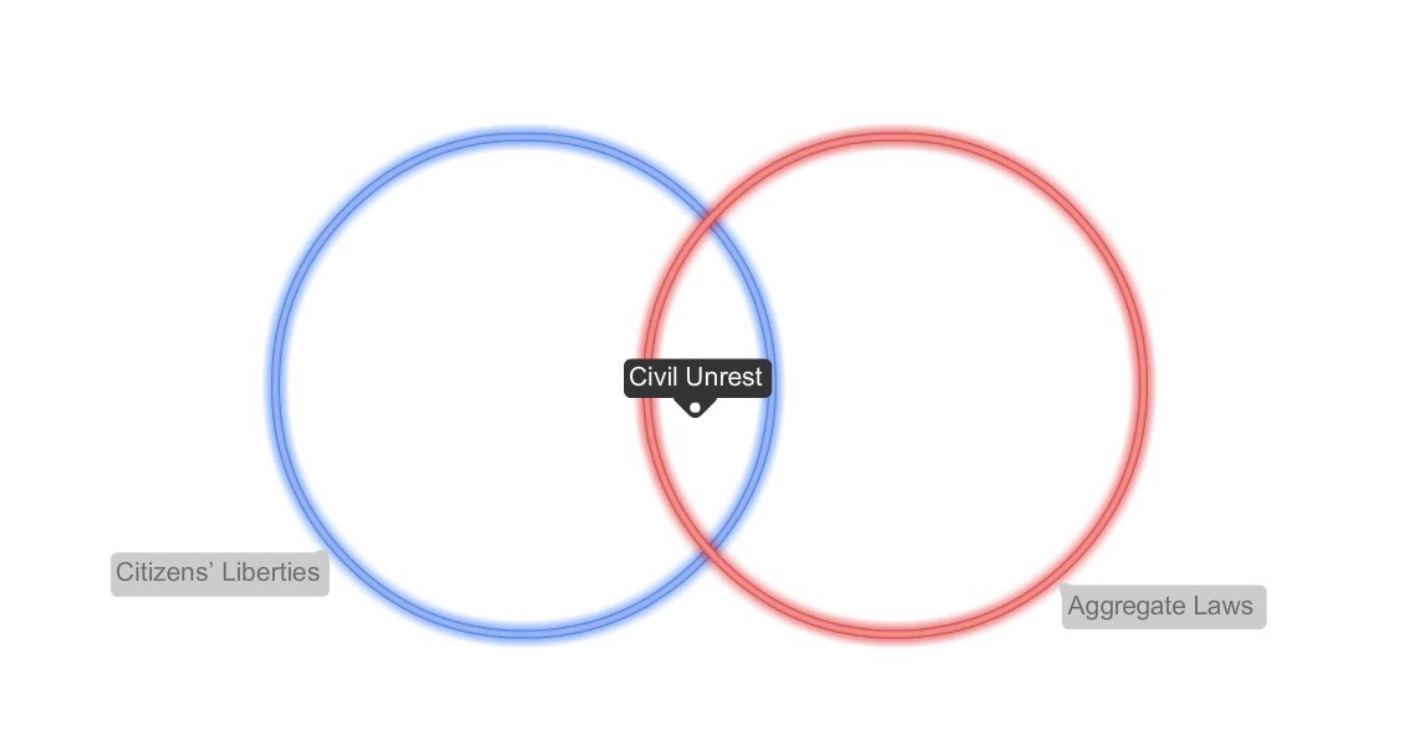 Assuming the coronavirus actually represents the threat that our governments suggest, the laws and regulations issued by Biff (and his fellow government officials Betty and Bobby) represent our Concurrent Compliance about social distancing, hygiene, and self-quarantine. These represent good ideas that good people would implement anyway because they represent rational conduct.

The political danger we face is that Biff, Betty, and Bobby assume our Concurrent Compliance is evidence of their wisdom and authority. It isn’t. We must guard ourselves not to be duped into the mental habit of believing that rational self-governance is the same as obeying government edicts.