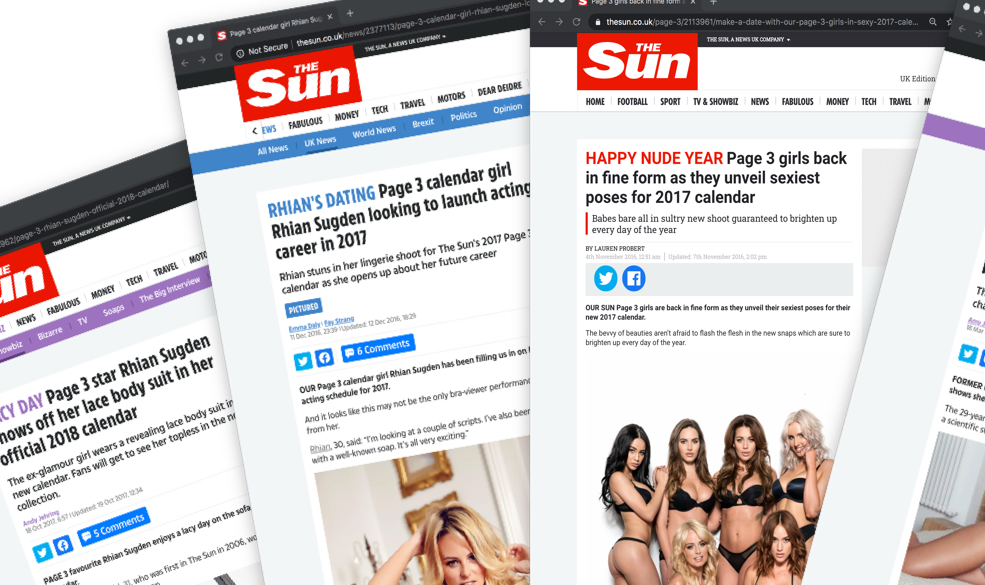 Democrats are no longer shy about embracing Socialism

The “Page 3 Girl” was a British journalistic innovation whose origin is disputed. Was it The Sun, The Daily Star, or The Daily Mirror?

The “Page 3 Girl” feature died about the same time that fully private, fully accessible, full-frontal nudity became available on your phone or tablet. Why pretend to buy a newspaper, when you can pretend you’re checking stock quotes? The publications insisted they were discontinuing the feature because of changing attitudes about the sexual exploitation of women. But they faced the same decision as their readers. Why pay photographers and models when racier stuff was available for free?

One thing the Information Age has changed—for better or worse is an exercise left to the reader—are cultural and literary norms about what should remain hidden and why. There was a time when pornography was kept under the counter at the local newspaper stand. Movie violence was depicted off-screen. Personal tragedy was discussed in hushed tones instead of broadcast over cell phones at the local deli. And Democrats used to insist on calling themselves Democrats and would punch in the nose anybody who called them a Socialist. Anybody want to take the bet that John F. Kennedy would have lived to see the moon landing if he hadn’t been a staunch anti-communist? (Yep, I’m aware of the paradox.)

Socialism is no longer a dirty word. This represents a sea change for America—and not a good one. Bernie Sander’s honesty is not refreshing, it’s refracting. Sure, the Democratic Party has been peddling Socialism-lite since Franklin Delano Roosevelt, if not Woodrow Wilson, but in the past they had the good sense to put it on Page 3 and call it a safety-net. The harsh light illuminating the Democratic Party today is being bent by the Information Age, Bernie’s candid candidacy, and the ideological exhaustion of the party’s leadership.

Back in the good ol’ days when Democrats were coy about the S-word, the tribute they paid to the virtue of free markets and property rights meant they still considered Socialism a vice. Now that Speaker Nancy Pelosi and Senate Minority Leader Chuck Schumer have embraced the contingency of a Socialist as their party’s leader, Page 3 Socialism has become Playboy’s up-front hedonism.

The downside for the Democrats, if there is one, will play itself out in the 2020 election. A November 2019 poll, conducted before Bernie’s surge, found that a remarkable 41 percent of Democrats would would vote for a self-identified Socialist candidate.

The downside for the rest of us is that some one-third of our fellow Americans are no longer content with smuggling Socialism-Lite into our civic discourse and pretending that it’s a safety net. They’ve plopped it down on the coffee table, right on top of Aunt Martha’s doily and the family album.

Our national discussion over the next eight months could center on principles. It could include economic theory and political philosophy. It might haul out pictures and stories from countries that experimented with Socialism and survived to regret it. It might speculate about promised utopias that never materialized once we allowed politicians to plan our lives and dispose of our labor. Or it could degenerate into an emotional melee pitting friends and family against each other, a melange of class warfare and misinformation.

My advice, Dear Reader? Keep the discussion centered on simple truths. Socialism isn’t about compassion. Compassion is about compassion. There is nothing on earth that can stop a free people from being kind, generous, and charitable to the poor, the sick, the elderly. But not at the point of a gun.

And that’s the real issue. When you argue with your Socialist friends and relatives, remind them that their proposed laws require government employees with guns and prisons to enforce them. “Sharing the Wealth” is no voluntary proposition when a Socialist is speaking. Their laws are not suggestions.

If you cannot, or will not, say openly, proudly, and with conviction that your life, your liberty, and your property is the inalienable essence of your being, then you will be guilty giving the Socialist what they need to win. You will give them the moral sanction (or is it cowardice?) that says your life, your liberty, your property are negotiable. If abstractions like the group, the tribe, the nation, the proletariat, the poor, the climate, are more valuable than the individual, meaning the individual can be sacrificed to the collective, then let’s call it what it is. Tyranny.